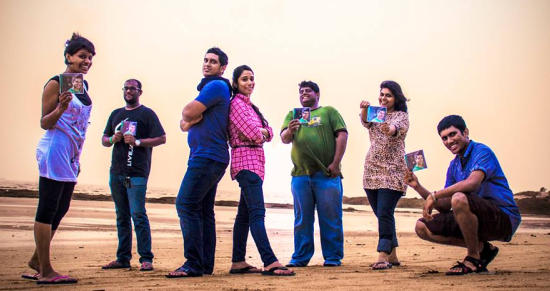 Thrilled to have India’s leading voice in worship write a guest post on our blog. Sheldon is a friend and colleague in ministry. This post will kindle a passion for the lost in your hearts, let us know, how you were blessed in the comment section. You can connect with Sheldon here.

It was the morning of Christmas and the church service had just ended. My wife Anita, a few friends and I set out from church towards the slums of Vidyavihar. It was a happy day with kids playing beside ‘matchbox houses’, which were parallel to the railway tracks, and lots of loud happy activity in what you and I would think to be conditions unfit for living.

Anita invited me over thinking it would be great for them to see and meet new faces. She, along with some of our church lady friends were regulars, who loved and shared the good news with the Vidyavihar ladies. We carried a guitar, a few Christmas gifts and a simple message powerful enough to turn the whole world upside-down down.

We exhausted all our action songs that day and my message was rather simple. My audience was women, children, a few men and about three eunuchs who were getting ready for their daily duties in the trains.

Everyone had a smile and as I shared more about this great Christmas King, you could see their eyes well up. Khushbu was one of the eunuchs who were listening. Probably his only take from my message were these lines:

“Whether you are rich or poor, great or small, male, female or neither… nothing really matters to Jesus Christ. He has opened the gates of His palace for everyone… He loves us all.” That was the first day I met Khushbu

During our next visit, Khushbu who was overjoyed over this acceptance opened his house for us to conduct prayer. It was party time with songs, the good news message and the kids’ loud shouts. Khushbu even distributed a huge dairy milk chocolate to every child. I was moved by the generosity of a slum dwelling eunuch whose heart God had opened to the good news of the gospel versus the stinginess of the rich. It is overwhelming what God can do!

We enjoyed visiting Khushbu week after week, and one day we encountered his mother who had just come in from Kolkata. She came to our church that Sunday and was completely broken over what had happened to her firstborn son.

Apparently, this chirpy and happy eunuch called Khushbu was once a young boy named Shubroto who ran away from his little home in Kolkota to Delhi to escape from his father’s scolding. Now more than fifteen years later, the mother was completely shattered to find her own son transfigured into the state of a eunuch, begging for a living.

The story broke our hearts. Her tears moved us to tears. Christ has taught us that people like these are our own family members who need to be brought back to His fold. What happened is surely heart-breaking, but I believe that what lies ahead is good. We have been gently working to probe into how all of this happened. I have a very dear friend who runs a Christian organization working to rescue such people in distress. We’ve been dialoguing and planning the rescue of Shubroto from the clutches of the eunuch mafia network.

They say it is impossible for someone in an organized eunuch network system to come out of it and live a normal life. They are not only sexually devastated, but more than that, brainwashed and mentally disfigured to the point that all self-worth is lost.

Then, they are reprogrammed to beg for alms and bring in booty of earnings to their eunuch gurus. This is the state of a child, kidnapped, castrated, sold and enslaved for life.

However, the good news is on two counts. Firstly, such a rescue operation has been successful previously and by the power of Almighty God, we are pressing on to see how we can work to present 24 year old Shubroto to his parents who are now desperate to have him back. On the second count, the good news of the Gospel is making its way into the heart and life of Khushbu and a transformational work has already begun.

Anybody who becomes a disciple of Jesus Christ has all the heavenly assurances, and the glow on Shubroto’s face is increasingly evident. Psalm 34:5 says “Those who look to Him are radiant. Their faces are never covered with shame”

A fresh call to missions:

My appeal to us all is “Let’s not be lazy. Let’s go the extra mile for the sake of Christ. Let’s go out to seek and save that which is lost.”

Shubroto needs your prayers for sure. But there are thousands of those hurting Shubrotos who need us to pray and take action.

I recall and trust the scripture which says: “When the enemy presses in like a flood, then God will raise up a standard above it.”

I am calling us all to be that standard for the Lord.